Are you looking for the perfect location for your event? Look no further as we have

the place the staff to host your next function... Find out more! ... 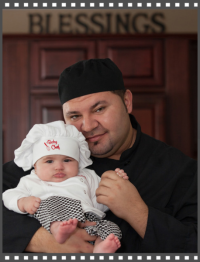 Prior to moving to the United States with his family, Chef Louie traveled to different countries giving him opportunity to try a cornucopia of new exotic foods with spicy bold flavors.  This time abroad marked the beginning of Chef Louie’s love for fine cuisine at an early age.  At age 15 he and his family moved to the United States and he was laden with the responsibility to help support the family.  He quickly sought out a position in the restaurant business and was fortunate enough to land a job as a dishwasher at Andiamo, one of the area’s premier restaurants.

During this time, Chef Louie’s appreciation of fine food and its preparation grew even more passionate.  Chef Louie would stay at the restaurant hanging around the kitchen long after his shift ended.  He would watch in amazement as the Chefs prepared various dishes and would pepper them with questions about their methods.

The Chefs appreciated Louie’s fascination and enthusiasm for fine cuisine and would often take the time to explain their methods to him, enriching this inquisitive child in the art of fine cuisine.  Because of his drive, determination and time spent at the restaurant ‘off the clock’ the management at Andiamo noticed his enthusiasm and he was given small promotions.  He slowly moved up the kitchen ladder to a position of an apprentice to the head chef.  Louie quickly learned the art of fine cuisine preparation and was awarded as Sous Chef.  During his tenure as Sous Chef at Andiamo, Chef Louie prepared meals for many business leaders and civil dignitaries, but his favorite group to cook for were the Detroit Red Wings.

In 2006, Chef Louie’s career and love of fine dining expanded to Lead Chef at the Townsend Hotel’s, Rugby Grille in Birmingham.  He then moved to Lead Chef at Bourbon Steak where he worked alongside renowned chefs Michael Mina and Don Yamauchi.  This time in Chef Louie’s career was a pivotal one as these world famous Chefs encouraged him to open his own eatery.  With this praise and encouragement from these legendary Chef de Cuisines, Chef Louie decided it was time to open his own eatery.

He found that opportunity July of 2012 when he had the chance to take over Valentino’s in Lake Orion.  Chef Louie changed the menu, the décor and ambiance of the restaurant.  His new menu showcased his special creations such as Louie’s signature zip sauce with wild mushrooms and Salmon Louie.  He has kept all the Italian classics but are now prepared with Chef Louie’s flair.

Being from strong family ties, Chef Louie’s goal was to create an environment that makes everyone feel like family.  While dining at Valentino’s, patrons are often greeted at their tables by Chef Louie carrying his toddler daughter Sophia – although the patrons are often more excited to see Sophia than Chef Louie.  The patrons time and again refer to the atmosphere at Valentino’s like going to a relative’s house for dinner.  Through hard work, determination and love of fine food, Chef Louie’s humble beginnings in the restaurant business have cultivated into his lifelong passion and dream of becoming an Executive Chef of his own restaurant.﻿ 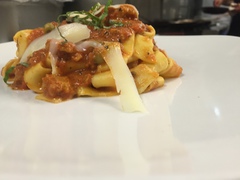